The concept of new quadriaxial electric shunting locomotive A 415 fed from traction accumulators originates from already tested threeaxial locomotive A 314 (710.201-5).

The vehicle was developed on grounds of as complete reconstruction of the original locomotive of 716 (V60) series. A completely new is the transfer of power – the original diesel-hydraulic set was replaced with the asynchronous traction motor and input planetary member of the original mechanical gearbox. This power transfer system using mechanical reduction box and coupling rods to individual wheel sets is especially suitable for the use in industry sidings. A high torque even at very low revolutions ensures the vector driven inverter allowing for electric power recuperation during the braking.

Two new approaches along the diagonal walkways, which are optimal in terms of safety and ergonomics, were designed for a better access of the engine driver to the cabin. The cabin of the vehicle is equipped with a sandwich roof (so called tropic), which is apt to ensure the thermal comfort for the vehicle operator, in particular in the summer months.

Large windows along the longitudinal axis of the vehicle are designed with negative slopes and equipped with powerful windshield wipers. The engine driver’s control panels with the seats are located diagonally at both sides of the cabin. The cabin is heated by the Webasto independent heating system.

The lead traction batteries with nominal voltage of 640 V and capacity of 930 Ah. Altogether 320 battery cells in 8 containers was used. Maximum discharge of batteries represents 80 % of capacity, whilst their service life under the normal operation and 1500 re-charge cycles is roughly 10 years.

The electric power obtained during the locomotive’s braking with the use of electrodynamic brake is supplied back to the accumulators and super-capacitors that are used mainly during the increased consumption in the set of wagons start-up.

The power electronics was placed inside built-in shelf located on one side in the space between the cabin and accumulators. A specific solution was applied to the cooling of the traction inverter by a liquid having a control loop for regulation of the temperature. To reduce the flange wear, the vehicle is equipped with modern flange lubrication system OK-02 fa TRIBOTEC – lubricant is subject to spraying directly upon flanges as they are rolling.

The sand trays are equipped with heated mixers that prevent the freezing of sand in adverse winter weather conditions. The sand blasting nozzles are heated too.

The locomotive is equipped with continuous electro-pneumatic brake DAKO BSE and direct-acting brake together with assistant parking brake circuit. 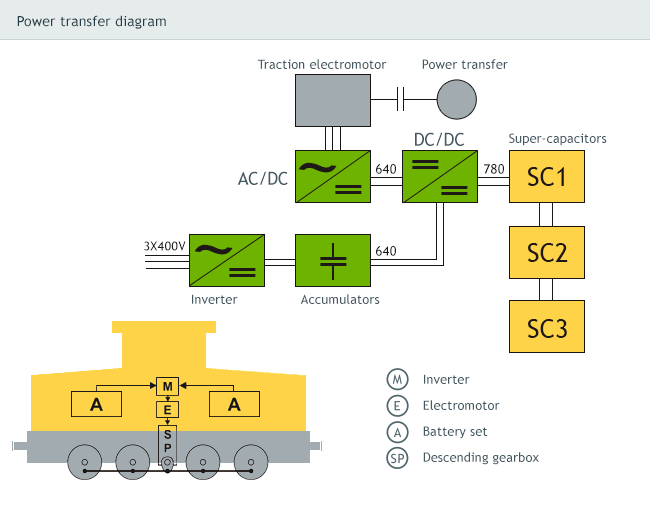