The cable shunting device PZ 15 is intended for rail cars shunting during their loading and unloading at the railway sidings, filling stations of the liquid products and terminals. It is capable according to the local conditions to set in motion and to brake the fleet of wagons of total weight of up to 500 tons in both directions.

We offer 2 versions of PZ 15: basic → for 1 rail and PZ 15 DUO → shunting of rail cars takes place always on one of the two parallel tracks. The presence of an operator in the vicinity of rail cars is necessary only to turn on or detach towing arm of crab.

The device PZ 15 consists of basic units - driving station, reversible station and crab with arm and drawn on travel groove outside the trackage with the help of the pull rope. It is possible to couple the crab’s hauling arm and the lateral hook of the wagon in the set. The part of supply includes electric switchboard with control system and the rope’s tightening device.

The traction and braking of the set of wagons are controlled by frequency converter. The programming automatics in the technology distributor allows for logical links to existing technology equipment such as installed at the siding (filling nozzles and arms, rail scale, etc.).

The whole shunting device technology can be designed for and implemented in the environment marked with the danger of explosion.

Is consists of welded travel frame, which through the use of anchor bolts is anchored to a concrete base where the main drive travels. The drive frame contains driving unit composed of three-phase airt-cooled electric motor and epicyclical gear with driving rope disk.

Placed on a concrete base of driving station are pulleys, guiding driven rope to the reversible station, as well as to towing crab. The tightening of the transport rope takes effect in a standard manner with the help of hydraulic unit.

Consisting of two welded frames with deposited pulleys on an iron-concrete basement outside the trackage.

The pulleys are ensuring guidance of transport rope from reversible station to traveling crabs as well as to driving station. Then structure is protected by the metallic plate cover.

Guiding grooves consist of the steel I – profile at a distance of about 1400 mm from the track centre (according to the specification of wagons), in which profile there is the traveling crab running. It has range of ± 100 mm from the axis of guiding groove for fixing wagon’s lateral hook and it is protected against running off the grooves at the end positions by double end-point sensors. The crab itself consists of welded steel structure with towing arm equipped with booster spring for easy pin handling in terms of switch on and detach.

The PZ 15 device can operate in arcs and points. It is possible to hide the taxiway in a loading ramp pavement or a road crossing. The rope is fixed to the crab by dead eye and clamps.

An unlubricated steel pull rope is designed according to the technical standard STN EN 12385-4 with diameter pursuant to designed load. The movable part of the rope in the trackage is supported by the rollers that reduce the rope’s abrasive wear and keep it clean.

As standard, the shunting device is controlled with the help of mobile radio set, which is necessary during the pin to hook coupling. ↓
The operator then can handle the rail cars from any place on the track.

Another possibility is to control device from the local box placed at the clear spot beside the track. The service control point is the distribution box itself, which serves only for the needs of maintenance and repairs. 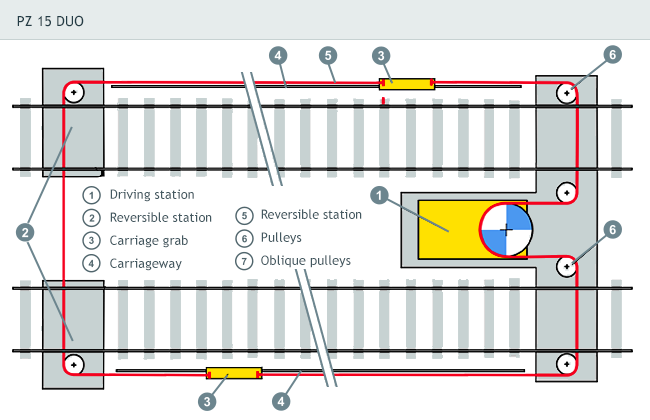